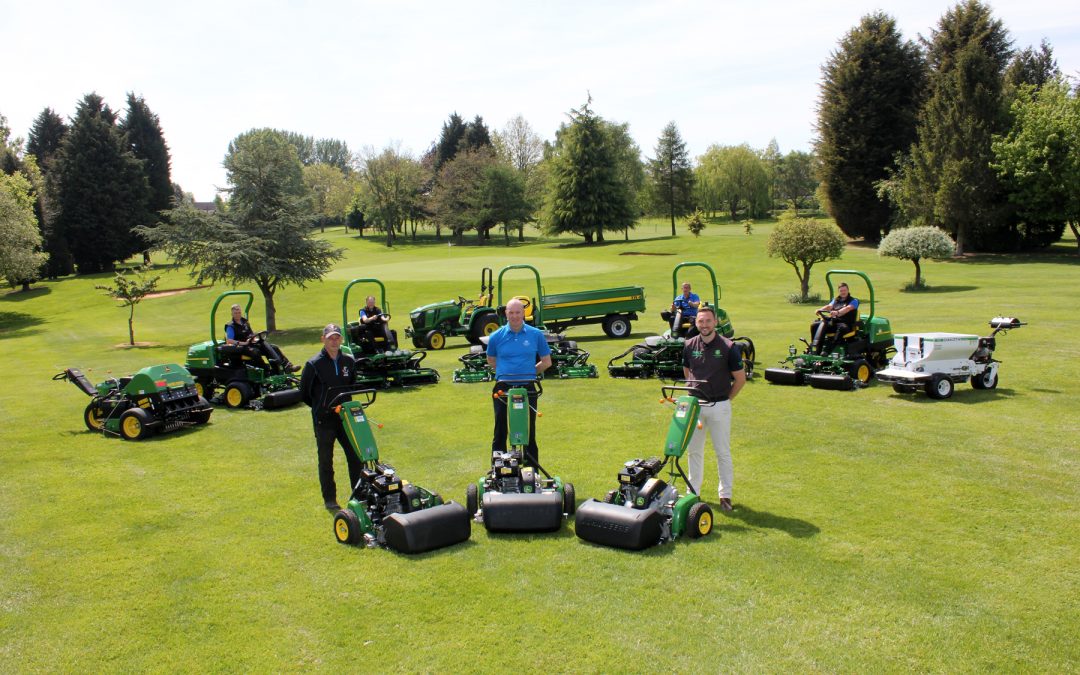 Founded in 1894, Hinckley Golf Club is one of Leicestershire’s finest parkland courses and is now looking to build on its reputation as one of the ‘must play’ courses in the Midlands, after investing in a new John Deere course maintenance equipment fleet supplied by local dealer Farol Ltd.

General manager John Prior and course manager Adam Castle opted for a new approach to financing the package deal, which brought their first ever John Deere machines to the club. These include mowers for the tees, fairways, approaches and greens, an aerator and a compact tractor plus ancillary equipment. The deal was also the first by Farol’s newest golf & turf area sales manager Jacob Shellis, who worked as a greenkeeper at The Belfry before joining the dealership.

“A big selling point for us was that the John Deere Financial offer was very flexible, so we were able to structure the deal around what suited us best financially,” says John Prior. “We chose a mix of operating lease and hire purchase to deliver best value for the club, with machines that will still be in good condition at the end of the deal bought on HP, and going down the lease route for the kit that will run up longer hours.

“After an initial meeting to discuss the options, Adam and I were really impressed with the whole set-up at John Deere as well as the Farol dealership process. The fact that John Deere has its own bank for example proves it is a very robust business, and everyone involved worked really hard to put the deal together.

“Once we saw the overall levels of dealer service and back-up, the speed of parts delivery and efficiency of repairs and maintenance, it gave both Adam and I, and ultimately the club’s board, the confidence that this was the right approach. Then after having the machines on demonstration for a couple of months, we quickly saw improvements in the course condition and aesthetics and decided there was no reason to look elsewhere.

“We wanted to establish a foundation for the next deal and the one after that, giving us more consistency and productivity – if it’s successful, it provides the club with a blueprint going forward. Seeing the results was justification of the expenditure to the board, and I have no doubt this process has helped us to attract new members and retain existing ones.

“It’s not just about the machinery either, it’s the whole package of product support, training and the relationship that’s been established between the club and our new partners that’s making a big difference.”

Course manager Adam Castle put the package together with Jacob Shellis’ assistance and presented the deal together with John Prior to the club board for their approval. “The overall message was that we were looking for greater efficiency and cost savings, particularly by reducing the expensive downtime that we had been experiencing with our previous fleet.

“Since the new machines arrived we’ve become more efficient and productive, we’re getting jobs done more quickly and cost-effectively and we’re using less fuel – that’s all we could ask for. The three A Model mowers we have bought can be set using the advanced TechControl feature, so we get the speed settings we want and everything clearly and easily set up on the dashboard, for better, more consistent cutting across the course.

“You always get niggles with new machines, but the speed with which any service issues have been dealt with has been notable right from the start. We did have a problem with a greens mower early on, but the dealer sorted it out within four hours – this is one of the main reasons we chose Farol and John Deere. The greenkeeping team is enjoying using the new machines and you can clearly see the results of this out on the course, which is looking better than ever.”

Beki I.
Fantastic customer service at Farol Tyres (Thame) after I suspected I may have a puncture. The friendly and polite staff looked at the tyre straight away even though I turned up at 8:30am unannounced. All sorted within 15-20 minutes, luckily no puncture but it was so reassuring to have the check. Thank you!

Chris T.
Fantastic parts service for my J Deere ride on mower .Spoke to Simon Campbell at 3pm had parts in Devon next morning ...Thanks Simon and all the Farol team...

John H.
These are the nicest most helpful people ive come across 5 star service by Richard & Ted many thanks for there Prompt service

Polly A.
Brilliant service this morning from tyre department in Thame, didn't take advantage of someone who doesn't know anything about tyres! Thank you!!

Alex P.
Cracking Service from the team in Great Shefford this morning! Phoned at 8.30 and everything was ready for me to collect half an hour latter!

And thanks for being open on a Saturday morning - saved my bacon!!! :D

James T.
See all reviewsWrite a review
powered by Facebook