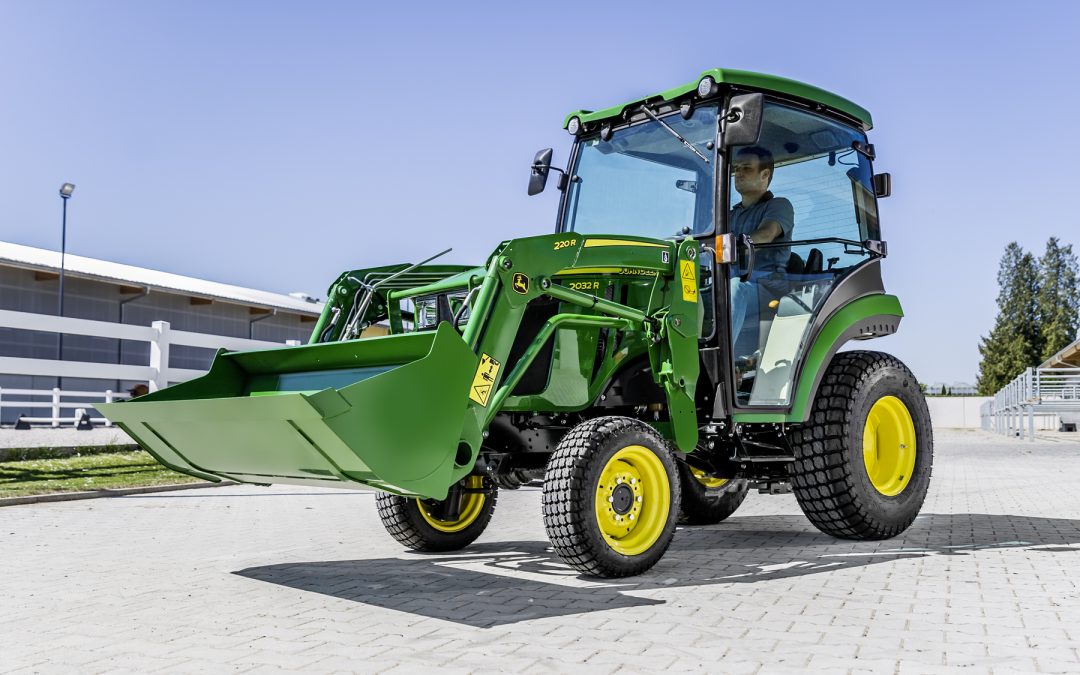 John Deere has announced a number of updates to the company’s comprehensive compact tractor range for 2020, which includes 13 models in six Series from 25 to 66hp.

The main change is prompted by the latest Stage V emissions regulations in Europe, which are designed to limit ultrafine particulate emissions in all engines above 25hp (19kW). Ultrafine particulates are less than 0.1 microns in diameter, which is 700 times smaller than a human hair.

John Deere’s compact tractors rated at 25hp and below – the 1026R and 2026R, which remain unchanged, and the new 3025E – already meet the necessary standards. Other 2R and 3R Series models above 25hp get a new Yanmar 1.6-litre, three-cylinder TNV Series diesel engine that features a high torque reserve, providing plenty of power under heavy loads.

At the top of the John Deere compact tractor range, the new 4052M and 4052R receive a larger 2.1-litre, four-cylinder engine with DPF. This is the same as the existing engine on the biggest 4066M and 4066R models, which remain unchanged, while several of the smaller 2R and 3R Series tractors are also given new model numbers.

In addition to the new engine, the 3R and 4R Series compact tractors will be equipped with a new eThrottle function integrated into the established eHydro transmission. This feature is designed make the tractor quieter and more comfortable to use, as well as more fuel efficient. With the simple push of a button, engine speed is conveniently linked to the foot pedal position so that engine rpm and tractor speed can both be increased as the pedal is depressed.

On selected models, the award-winning Hitch Assist system makes coupling up implements and trailers to the tractor’s rear hitch or three-point linkage quicker, easier and safer. Using this system, external switches mounted on the rear fender allow the operator to move the tractor backwards and forwards at a maximum speed of 12mm/second, and raise or lower the hitch as required.

Other advanced technology features on John Deere compact tractors include LoadMatch, MotionMatch and SpeedMatch operating modes for maximum versatility in a wide range of tractor applications, plus a choice of AutoConnect drive-over rotary mower decks.

Cabbed versions of John Deere’s new range of compact tractors for 2020 can be ordered now from UK & Ireland dealers, while open operator station models will be available from October.

Beki I.
Fantastic customer service at Farol Tyres (Thame) after I suspected I may have a puncture. The friendly and polite staff looked at the tyre straight away even though I turned up at 8:30am unannounced. All sorted within 15-20 minutes, luckily no puncture but it was so reassuring to have the check. Thank you!

Chris T.
Fantastic parts service for my J Deere ride on mower .Spoke to Simon Campbell at 3pm had parts in Devon next morning ...Thanks Simon and all the Farol team...

John H.
These are the nicest most helpful people ive come across 5 star service by Richard & Ted many thanks for there Prompt service

Polly A.
Brilliant service this morning from tyre department in Thame, didn't take advantage of someone who doesn't know anything about tyres! Thank you!!

Alex P.
Cracking Service from the team in Great Shefford this morning! Phoned at 8.30 and everything was ready for me to collect half an hour latter!

And thanks for being open on a Saturday morning - saved my bacon!!! :D

James T.
See all reviewsWrite a review
powered by Facebook